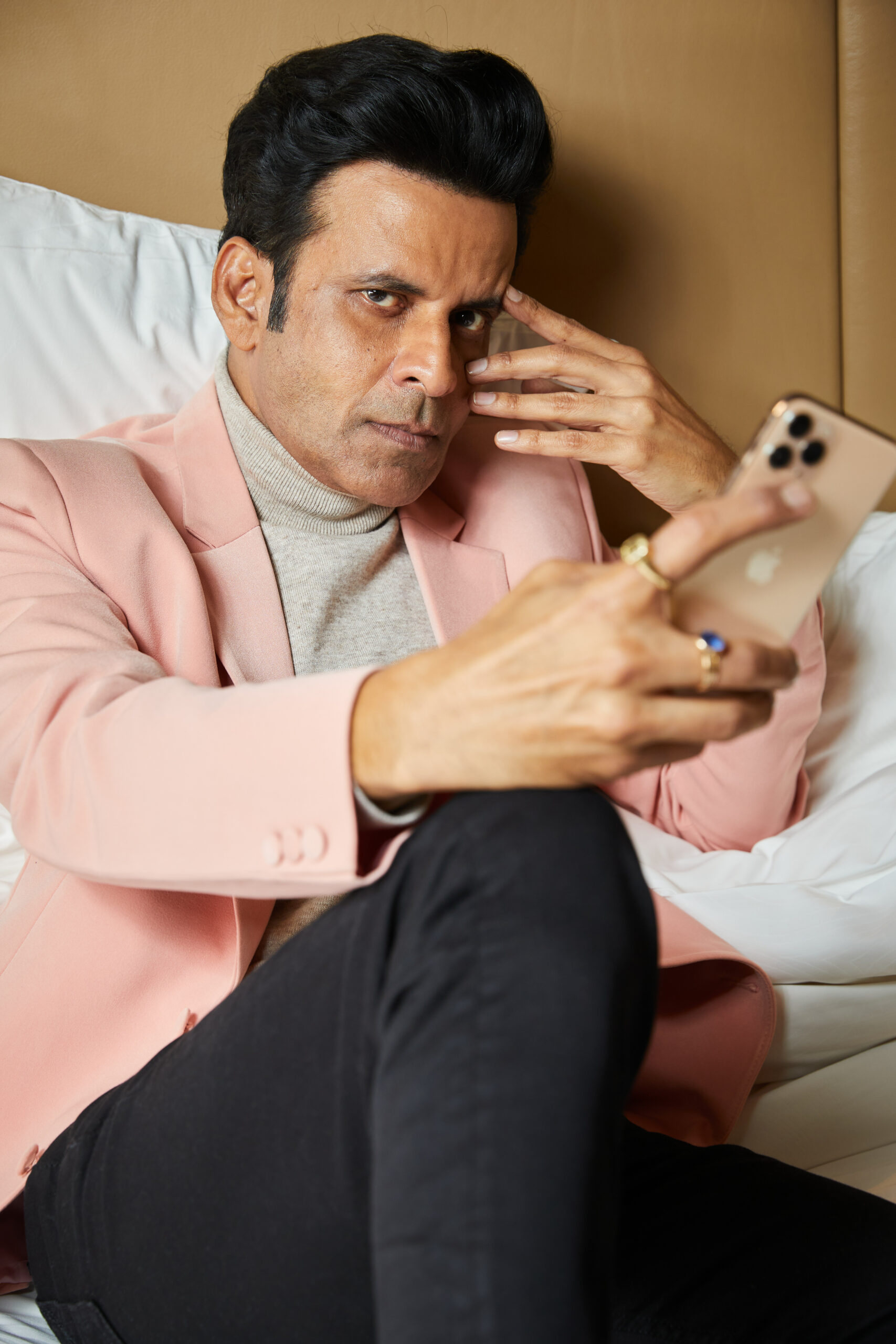 For lovers of good cinema, Manoj Bajpayee is the oasis that promises and delivers stirring performances that befit the title of an actor. Ever since Bhiku Mahtre in the 1998 film Satya, Manoj Bajpayee has been cementing his identity as a reliable, clean and captivating actor who knows how to bring a character alive with literally zero fuss. From the poignance of Professor Siras in Aligarh(2016) to the zest of Sardar Khan in Gangs of Wasseypur(2012), Manoj has been adding a rare tone of brevity, class and perfection to Indian cinema.

In 2019, with the Netflix series The Family Man, we saw Manoj portray intelligence officer Srikanth Tiwari with his usually enigmatic brilliance, forcing us to search for a bit of Sri in ourselves. The series saw its second season releasing to rave reviews, not just for the tight plot and amazing delivery, but also to the now-household name Srikanth Tiwari giving Manoj his perfect spot in the limelight.

His new project Hungama Kyon Hai Barpa, a part of an anthology celebrating 100 years of

Satyajit Ray premiered on Netflix on June 24th, and in an exclusive interview with Juveria

Tabassum, Manoj speaks about his appreciation for the revered storyteller, his experience as Srikanth Tiwari, and his journey of many troughs and crests in the industry so far. Also read about the bones he’s got to pick with the term “Bollywood,” what he thinks of the stardom complex in the industry, and his pick of the most underrated actors in the field today.

On The Family Man:

The best part about working with Raj and DK is that they are not only modern and liberal in their approach, they also look at any kind of incident from all angles and perspectives. They never take a one-sided look at anything. They are in with the times, changing themselves whenever required. They also welcome and incorporate all valid ideas. With them, the set is comfortable, collaborative and creative. I love being on the set when I am shooting for them.

Srikanth Tiwari is each and everyone of us. He is struggling to find a balance between a demanding family and a demanding job. This is what people are relating to. This is the element that interested me, and led me to join the project, apart from the fact that it was coming from Raj and DK, who are so highly talked about.

In Season 1, he was in all of his elements, jumping with confidence. He could negotiate with anyone, in any kind of situation. He could cross boundaries and get the work done. At home, he tried giving everything and anything for the kids and his wife. He was truly a maverick. In the second season, he is someone who is burdened and troubled. Everything that he treasured is taken from him. He has left his job. He is in an atmosphere where he doesn’t know how to help himself. His children are completely slipping away and his wife is not happy.

My chemistry, as you call it, with Sharib Hashmi, has been on spot since the first day. It took a little bit of time to get into this relationship/association that we have in the series. We really wanted to take it somewhere else. At rehearsals and even during conversations we’d share feedback and suggestions. We were working for the project, rather than working for ourselves. And that is true with each and every one. My association with the kids, and with Priyamani(who plays Suchitra Tiwari), is also on another level. We do a lot of rehearsals, and it isn’t a competitive atmosphere. We are collaborating to reach the same goal. And that goal is to make each and every scene interesting.

I don’t think any one of us expected any controversy, or anyone pointing fingers at us because Raj and DK, the writers, and the rest of the team, have always intended to make a good project which has depth, nuances, and is well-layered. At the same time, we wanted it to be quite interesting and entertaining for everyone. We don’t do anything we are not convinced about. So all the controversies that were thrown at us were not justified. We are not those people. We don’t want to offend or hurt anybody. We are only interested in storytelling and in respecting all cultures and languages.

On his journey in the industry:

I don’t think I am one of the best. This is not a statement out of any humility. I sincerely think that way. You can take it at face value. I am not anywhere close to the best from my generation, or gen-next. All of them are far far better than me. I am learning, and trying to evolve as an actor and as a person. All those appreciations, they overwhelm me, at that I don’t personally think I am anywhere close to anyone in this industry who is considered good. I still have a long way to go before I can actually call myself a good actor. This is a thing that always goes on inside me. Every actor who is being celebrated, or who is getting admired for the work that they are doing, you should always consider me lesser than them, and I sincerely feel that way. I really believe in it. The journey of learning is always, always, always on. I look at myself and I always feel like I can do better; tweak some performances here and there or point out the mistakes that I have made.

There is no point guessing. Let the theatres open, and let things get back to normal and let’s see how audiences respond, and how much cinema has an impact on OTT. OTT is the only medium of entertainment left to the public during the lockdown. Let’s see where it goes from here. It is true that OTT has thrown up many performers, who would have otherwise found it very difficult to find a place or respectful place in cinema. I would like to see how things pan out once corona is out and masks are off and the lockdown is lifted.

I have done gangsters, but can anyone find a similarity between Bhiku Mhatre and Sardar Khan. Every time I am asked this question, it is about the job. However, we are trying to explore the person, not the job. So yes, in the future too, I will play gangsters and policemen if the roles are fantastic and demand me to meet those requirements and make it look really really interesting. You play a hundred lawyers, but each lawyer is not the same. It is the character that we are focusing on.

Luck is a factor which plays a role in every professional’s career. But there is also the hard work, the roller coaster ride; it hasn’t been easy. I will never wish anyone to be in my shoes. These shoes are completely torn and bruised; my feet are bruised. If anybody has the patience and ability to endure all kinds of rejection, and failure, they can very well wear my shoes.

Why should I compare? I take great pride in my journey and in the person and actor that I am, and I believe that is enough. I also take great pride in saying that I am still learning. People who have gathered a mass following are bigger people. I am a very small guy, my goals are very small. I never wanted to reach anywhere. I just wanted to do this job because I am very passionate about it.

First of all, I don’t call it Bollywood. I think it is too demeaning for an industry which has been creating such great content. It has space for every genre. And gives freedom to all filmmakers to make their own kind of films. Actors have been doing different kinds of things, and they all have their fair share of audiences. Independent cinema has been thriving for a few years now. It offers a different kind of storytelling and treats cinema as an art. I am part of that too. We all have our set of audiences interested in those films. Aligarh doesn’t enjoy the same kind of audience as Satyamev Jayate. The audiences for Aligarh or Bhosle are different from the audience of mainstream cinema.

My story is one part of the anthology. The story is called Hungama Kyon Hai Barpa. It is directed by one of the best directors of this industry, Abhishek Chaubey. He is a director I am a big fan of. He helped me perform Musafir Ali, and perform it right. I just hope that the audience, and all those who love Satyajit Ray find it a good performance. With Abhishek Chaubey’s help, I tried to do complete justice to it. If I talk about the emotion or the role, I would be giving it away, so I better stay away from that. I learned quite a lot in those 10-12 days we shot the story for.

Ajay Devgn to return as Vijay Salgaonkar in Drishyam 2

As soon as the lockdown was lifted last year, we shot the story. We rehearsed, and then shot it for 10-12 days. The shooting was done with extreme precaution, following the protocol.

The dinner sequence that happens on our marriage anniversary. I enjoyed doing that. It had too many layers. We constantly worked on little details and the nuances, which gave me quite a kick.

1971, or Budhiya Singh. These two films, or for that matter, Pinjar, would have been really celebrated. I think people should watch Budhiya Singh on Netflix, which, according to me, was my topmost performance. It really satisfied me in totality.

It’s hard to name one or two. Ram Gopal Verma, along with Hansal Mehta and Anurag Kashyap really understood the intensity with which I have been working on my roles, and that is what they admired the most. Shekhar Kapur, Abhishek Chaubey and Neeraj Pandey know my strengths and weaknesses and work on those limitations, and force me to be a better actor in their projects.

Aditya Menon is someone I think is an amazingly gifted person. He is also extremely hard working. His craft is quite enviable. Raghuvir Yadav, I think is the acting god of this country. Sometimes he gets his kind of roles that respect him, and sometimes he doesn’t. I would like him to do very, very well, and be respected for the kind of actor that he has been. People should show loads of respect to Vinay Pathak and Ranvir Shorey just by giving them great roles. I know they will come out with flying colours with the kind of zeal, and craft and intensity that they have.

It keeps changing. Sufi, bhakti songs are my favourite. I have been listening to Bruce Springstein quite often these days when I have been in the mountains.

To finish all my backlogs. Be it Ram Reddy’s film, Kanu Behl’s film, or Abhishek Chaubey’s next projects. These are going to keep me busy this year. There’s also another film by a new director called Rahul, and I have to finish that backlog. This year is going to be quite busy. Two months are gone due to covid restrictions and lockdown, and I just hope that the shootings resume in full swing soon.